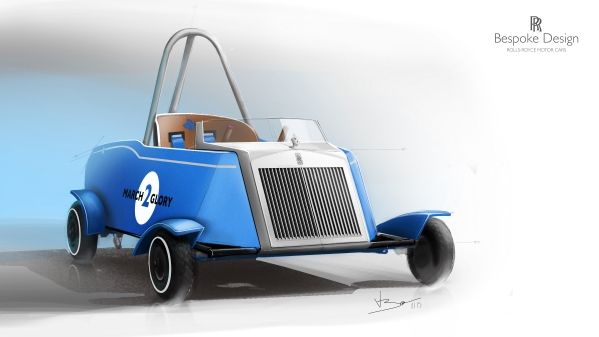 A closely-guarded partnership between Rolls-Royce Motor Cars and a team of budding racers finally broke cover on Sunday. The venerable environs of the Goodwood Motor Circuit did little to intimidate this team of maverick designers, engineers and drivers who produced a highly encouraging performance despite the wet track conditions.

The car, a specially engineered electric racer, reached speeds of 8mph as it made short work of a track that has proved the scourge of some of the most revered names in motor racing history.

From practice through to the final race, the twin-battery 24 volt power-unit and aero package worked in perfect harmony. The team, an enthusiastic group of 10 and 11 year-olds from The March Church of England Primary School, just 100 metres from the Home of Rolls-Royce on the westerly corner of the Goodwood Estate, were ecstatic with a performance that built on the strength of a highly successful debut in the 2014 Green Power IET Formula Goblin race series.

The livery, inspired by the exploits of Sir Malcolm Campbell and his land-speed record winning craft, Bluebird, was designed by the March Team in collaboration with the Bespoke designers at the Home of Rolls-Royce. A series of masterclasses, held at the school and at the Company’s head office, determined the final choice of design and also gave the children an insight into the super-luxury automotive manufacturing process.

A team of Rolls-Royce Apprentices from Assembly, Engineering, Wood, Leather and the Surface Finish Centre then set to work, turning the design vision into a sleek, exquisitely finished racer, fittingly named ‘March 2 Glory’. Maggiore Blue, the colour made famous by the Phantom Drophead Coupé Waterspeed Collection, is perfectly counterbalanced with a timeless combination of aluminium-effect bonnet and grille surround.

A hand-painted coachline with hare logo, painstakingly applied by Master Coachliner Mark Court, sits above the team’s signature ‘March 2 Glory’ insignia. The addition of a sartorially on-point white pinstripe to the tyres completes a bold and evocative design scheme.

Comfort for the driver is guaranteed through the application of the finest grade Phantom leather in Tan, finished with Bespoke blue stitching. A perforated leather backrest displays the initials of all of the team members, hand-stitched by the children, overseen by the Leathershop Apprentice team.

In a unique nod to modern-day history, a ‘March Hare’ hand-veneered mascot, takes the place of the traditional Spirit of Ecstasy figurine. A similar mascot, in the shape of a rabbit, can be seen on the Rolls‑Royce four-wheeled gravity racer, originally raced at the Goodwood Festival Speed Soapbox Challenge in 2002 and now on display at the Company’s head office.

Far from an exhibition of style over racing prowess, The March School car is an engineering triumph. An aluminium space-frame, reminiscent of the state-of-the-art frame that underpins the Rolls-Royce Phantom, has been specially built to reduce weight, in turn, reducing the friction coefficient between the road and tyres. The space-frame is clad in light-weight body panels, hand‑moulded using advanced techniques in the Rolls-Royce Surface Finish Centre to the shape of the frame to make the car as aerodynamic as possible. Adherence to the strict guidelines of the Green Power IET Formula Goblin race series ensured the hackles of the eagle-eyed scrutineers were not raised.

An exhaustive process of testing and refining overseen by the marque’s Apprentice team ensured linear torque delivery from the car’s twin 12V battery pack. Exceptional road-holding capability is also maximised through intelligent channeling of airflow. This is via intuitive positioning of the ‘March 2 Glory’ number plate which is mounted and recessed at an optimal angle for maximum downforce – the perfect configuration for a rear-drive racer.

Andrew Ball, Global Corporate Communications Manager, said, “We were delighted to support The March CE Primary School with their 2015 Greenpower entry. The team at Rolls-Royce were impressed with the children’s enthusiasm and passion for the project and their attention to every detail. We have no doubt that they are designers and engineers of the future, and we look forward to welcoming them one day to the Rolls-Royce family”.

Chris Hicks, Maths Teacher, The March Church of England Primary School, said, “It has been a real privilege for the children to work with the experts from Rolls-Royce and I’m sure it has inspired many to pursue future careers in engineering”.

The race was organised by the Greenpower Education Trust, a charity that aims to promote sustainable engineering and technology to young people across the UK. Since inception in 1999, GreenPower has rapidly grown and now works with 500 schools and over 8,000 students.

Behind-the-scenes of the Wraith Inspired by Fashion shoot

Wraith Inspired by Fashion effortlessly captures the allure of haute couture. So for the shoot, we brought the world of fashion, to the Home of Rolls-Royce. Featuring clothes by internationally renowned designers, these models draw out the elegance of craft and assembly at Goodwood, where each Rolls-Royce is painstakingly built by hand. 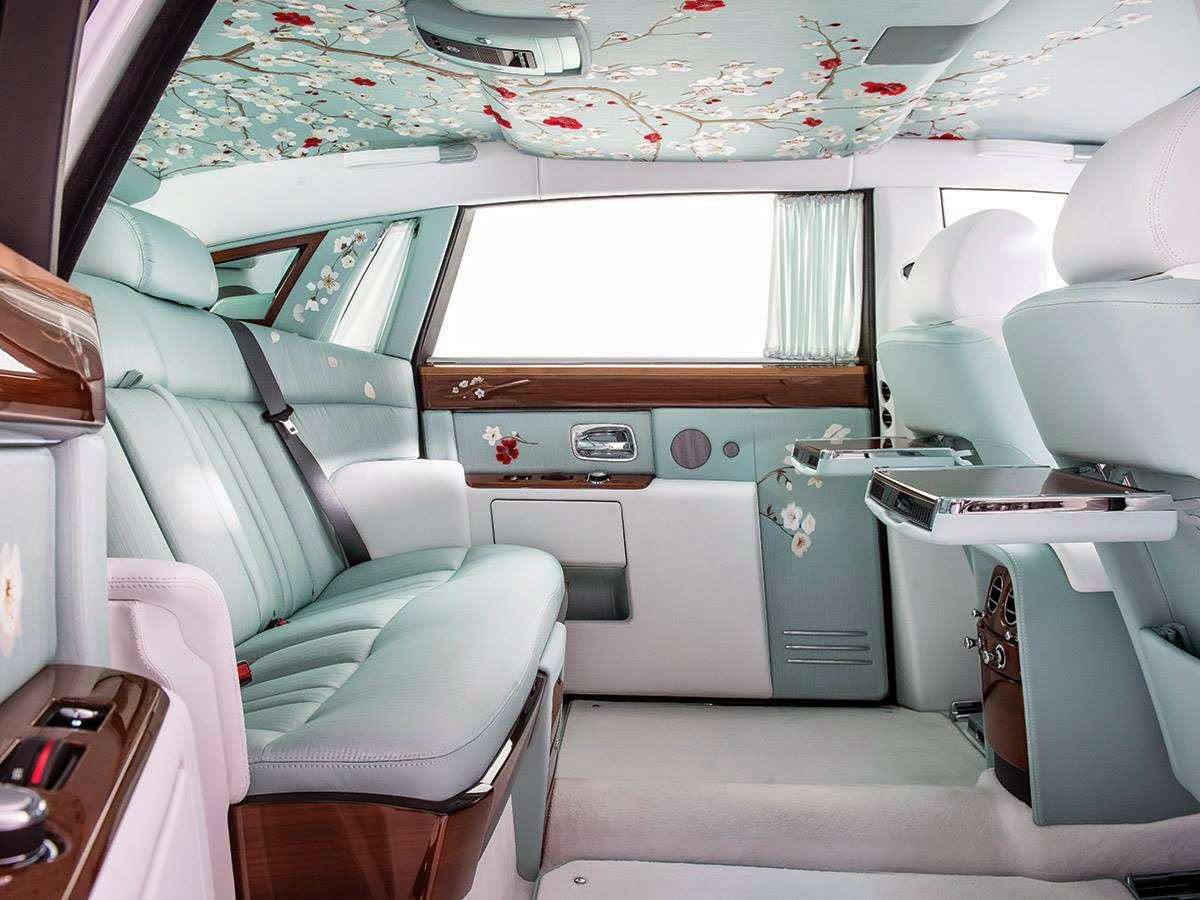 Serenity Phantom is the most exquisite Rolls-Royce to date, and there is only one in the world.
Recline beneath a delicate blossom tree, painstakingly hand-painted and embroidered into silk. Ruby Chaplets and Mother of Pearl flash into your peripherals from the clock face and dials, all set into Smoked Cherry Grain Veneers. This is a scene of complete calm, and a bespoke masterpiece.
Serenity Phantom will premiere at the 85th Geneva Motorshow. 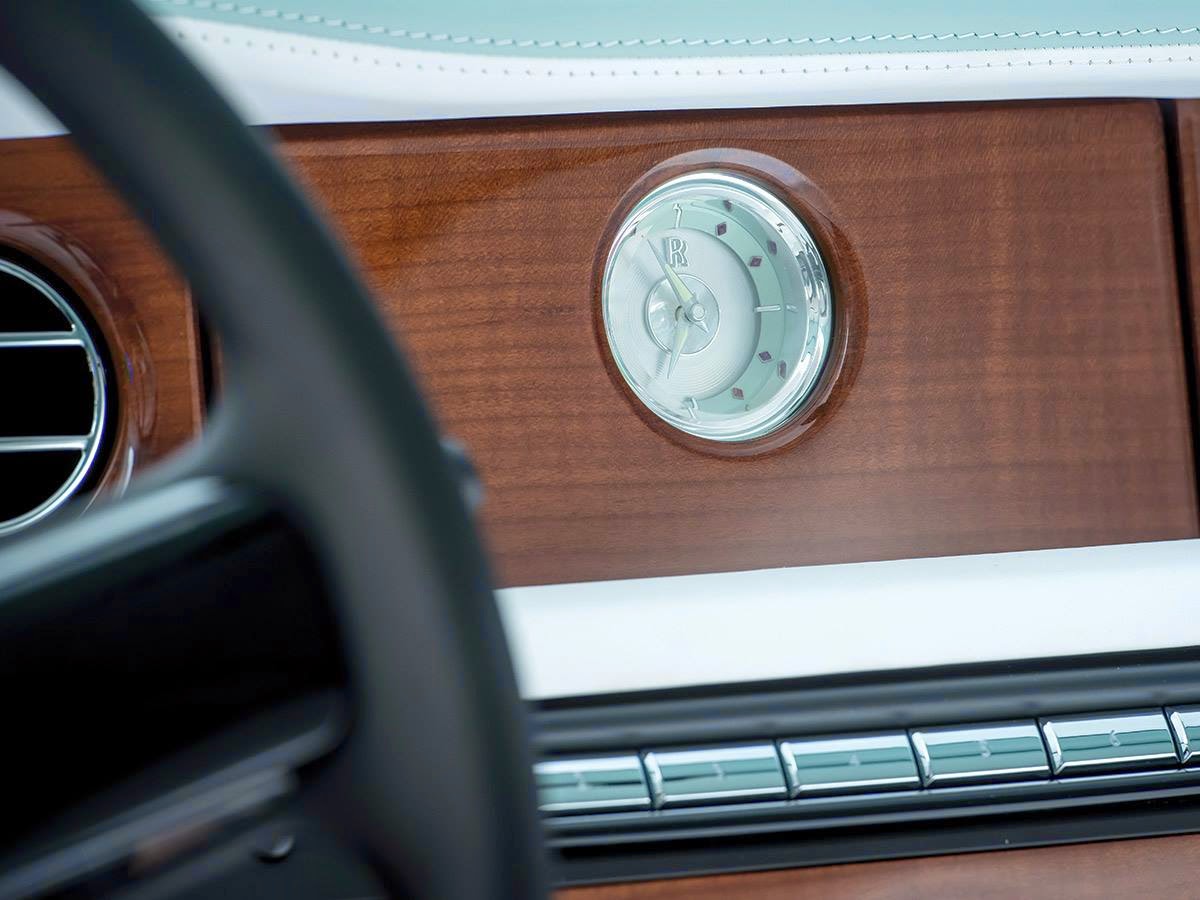 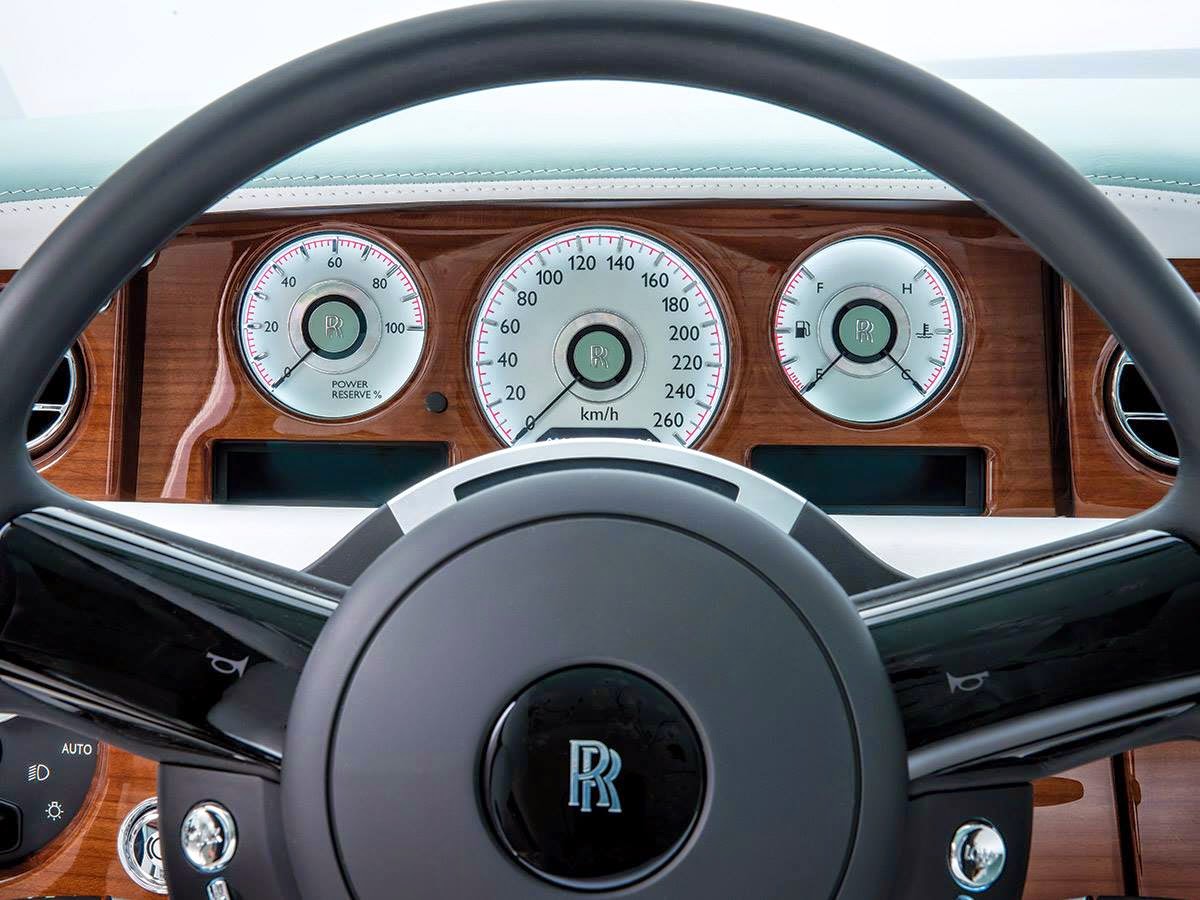 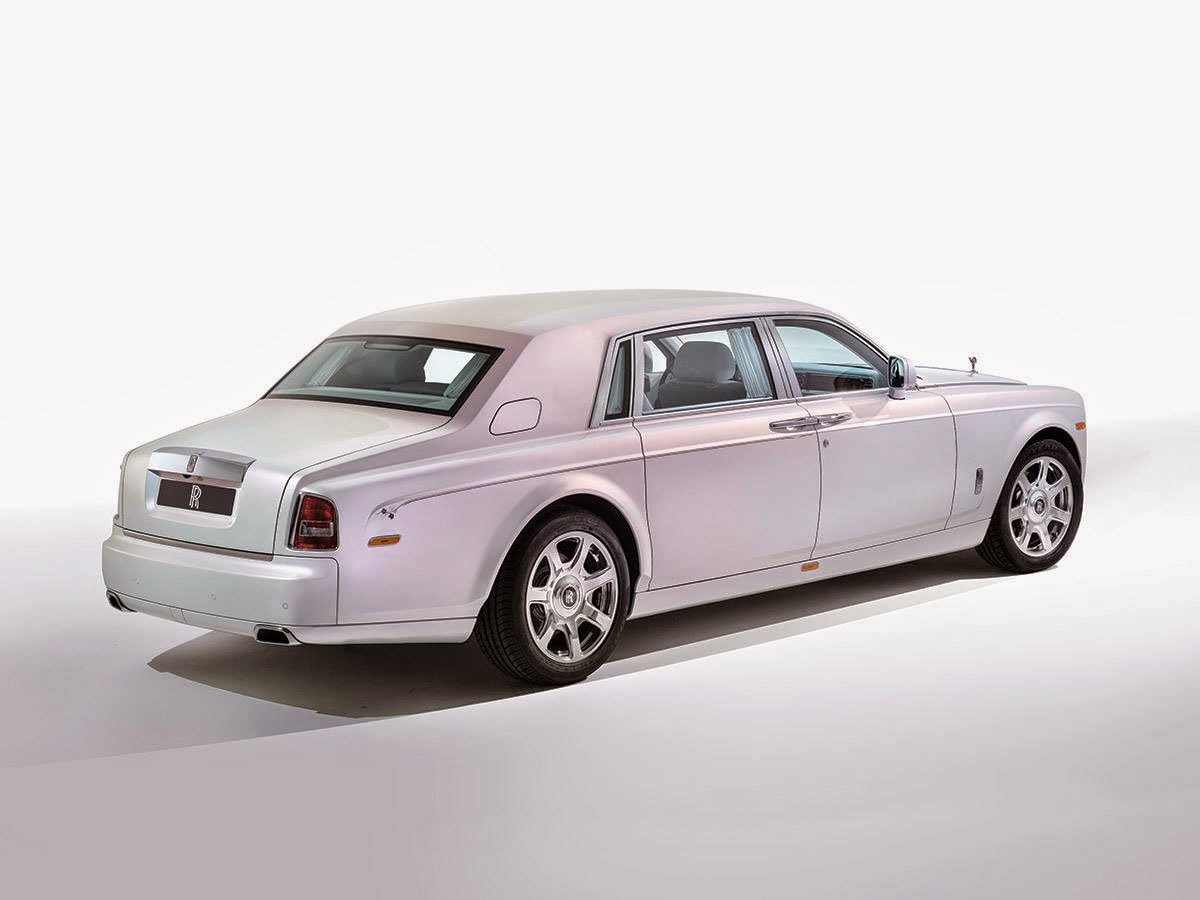 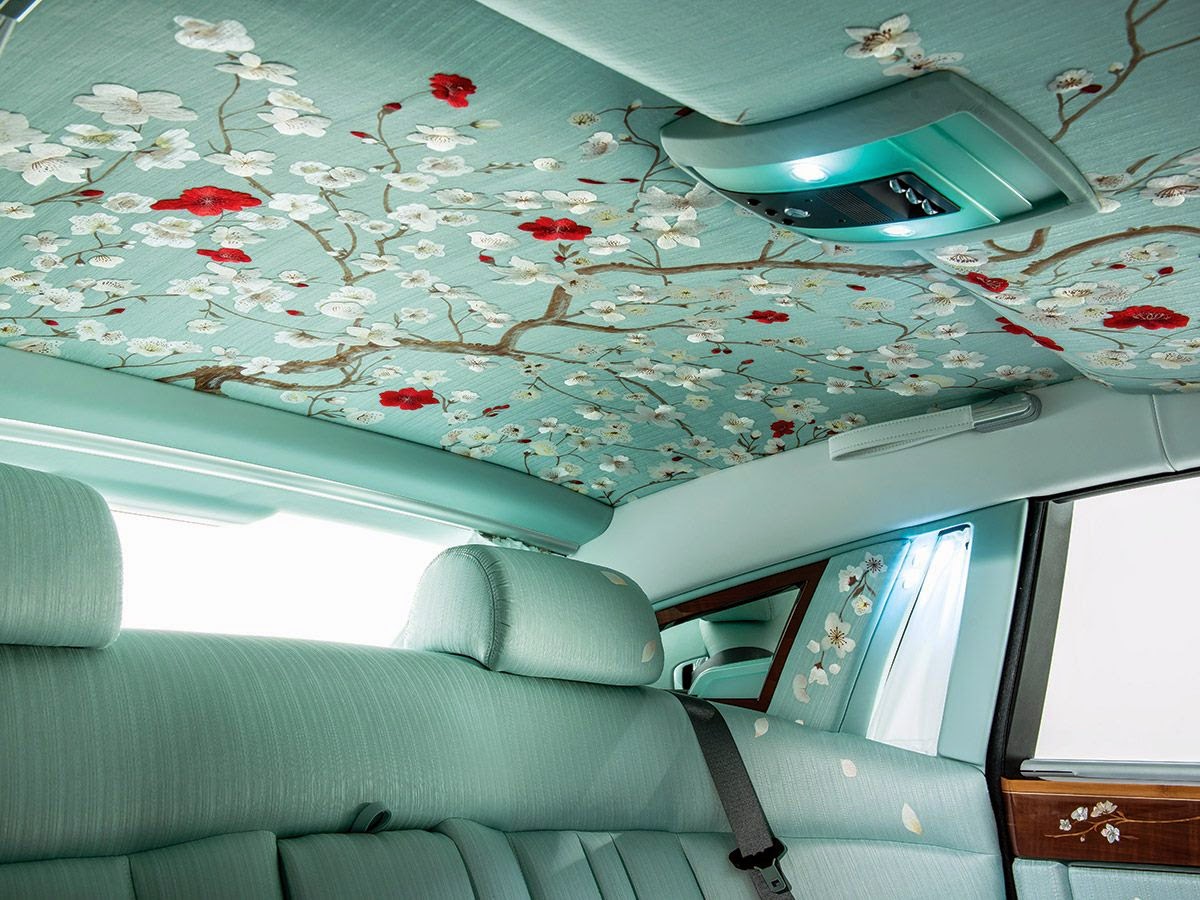 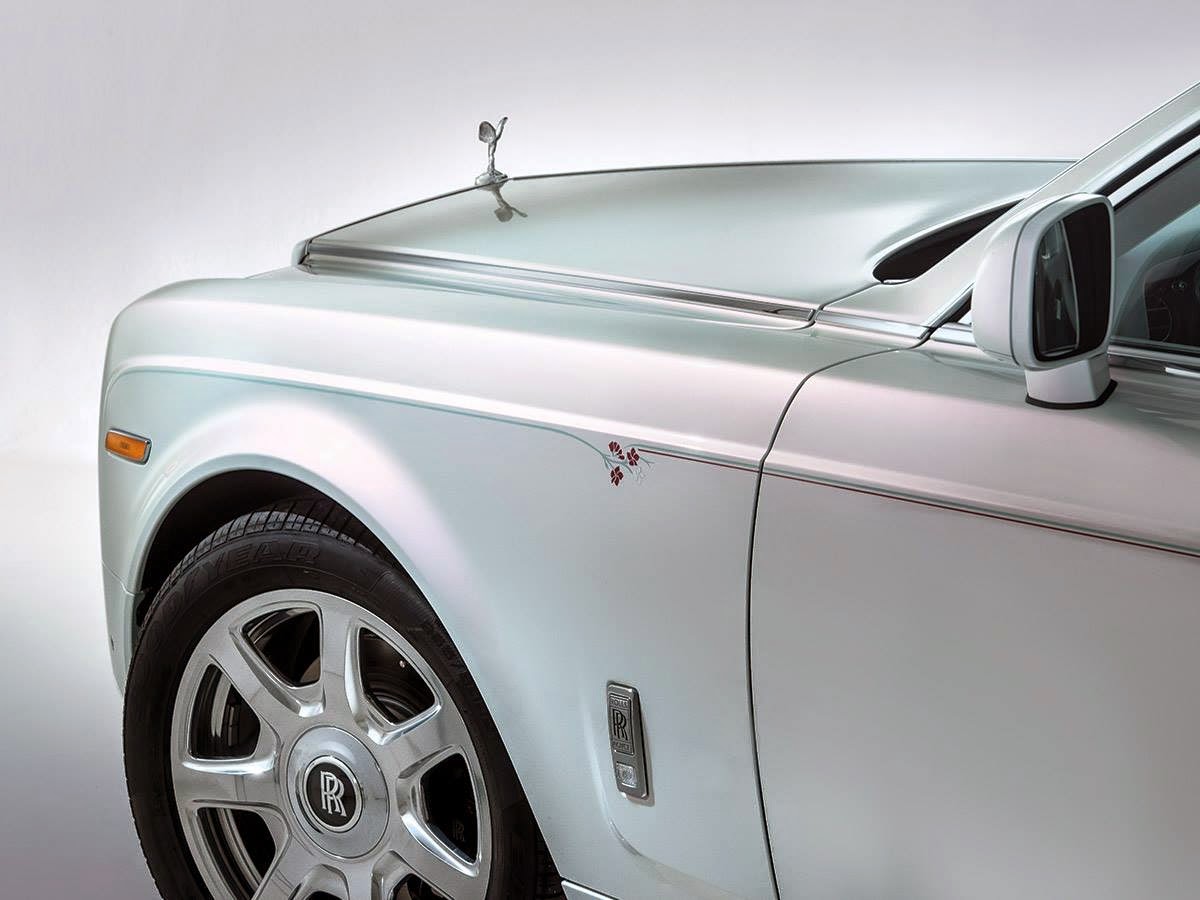 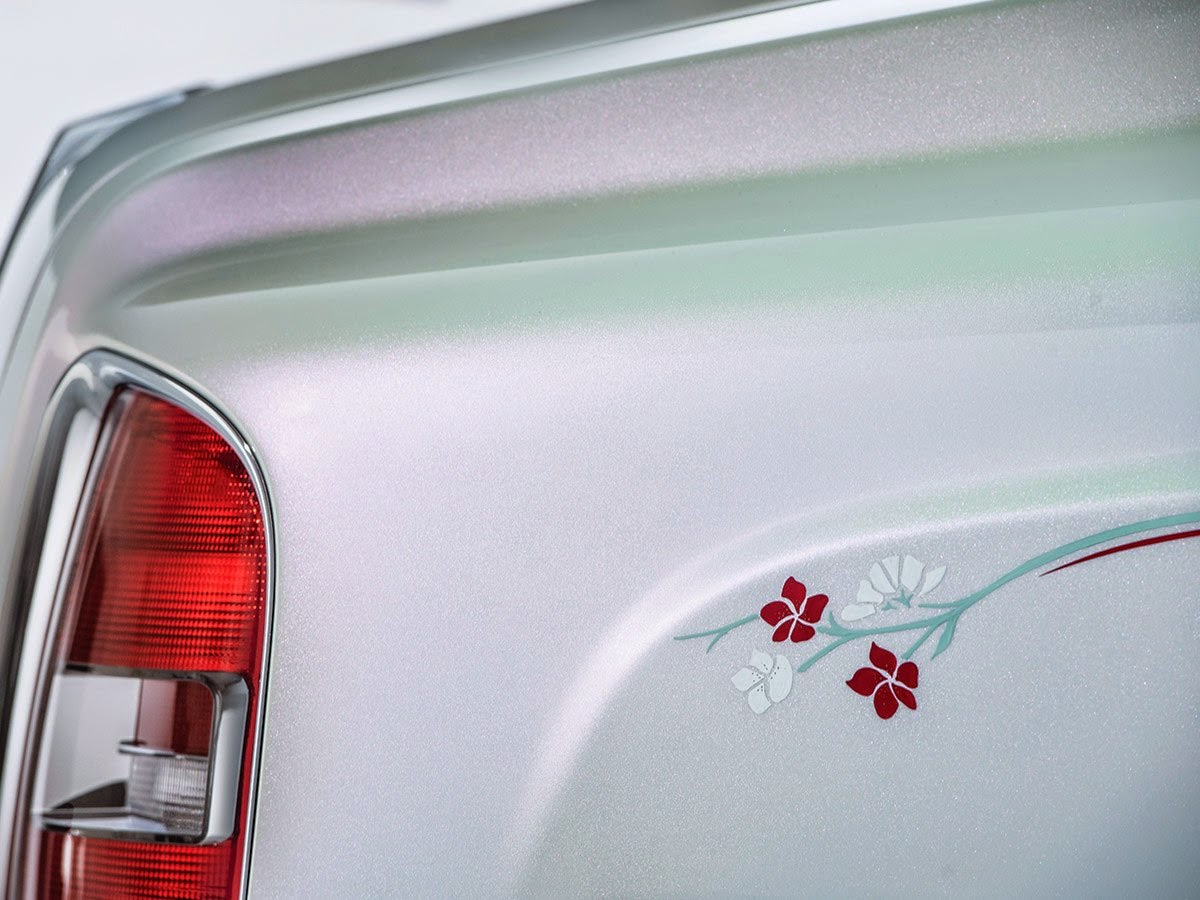 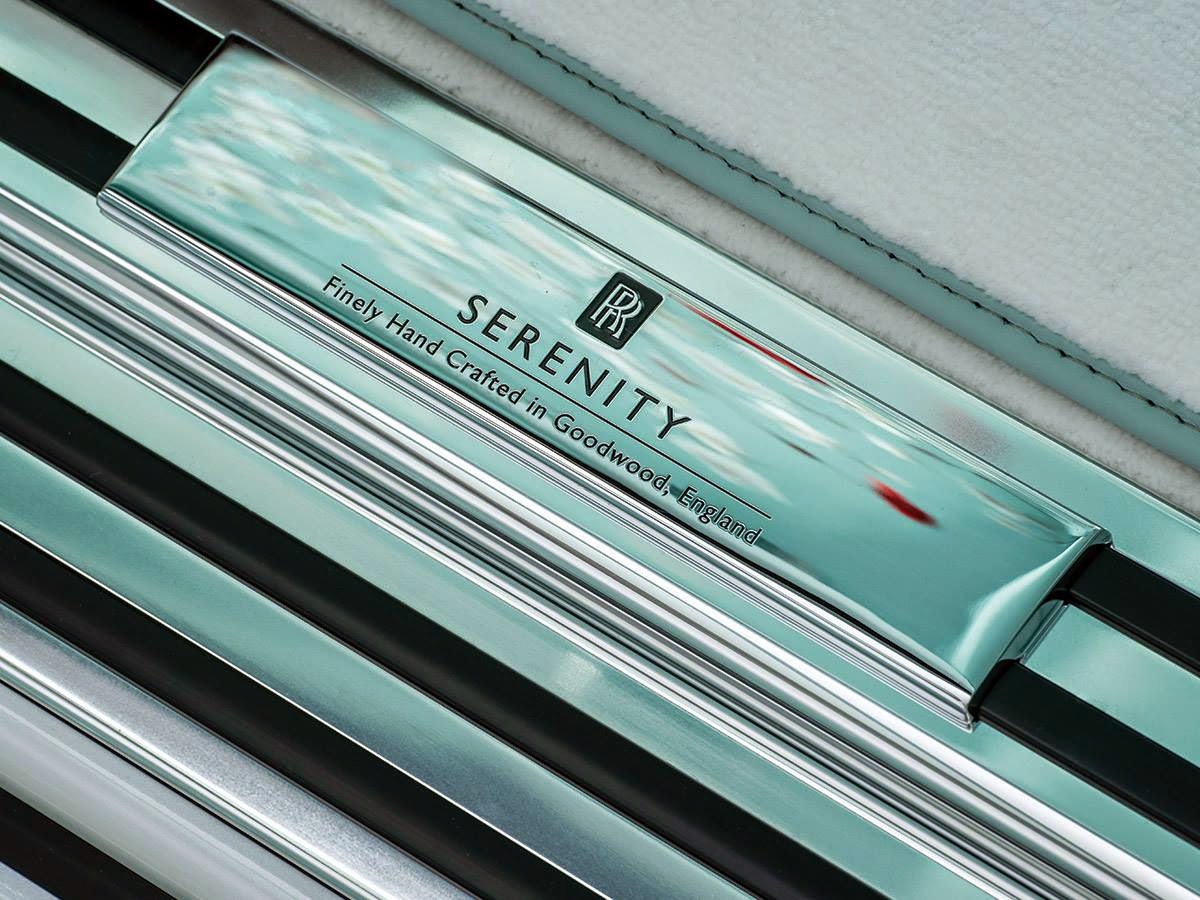 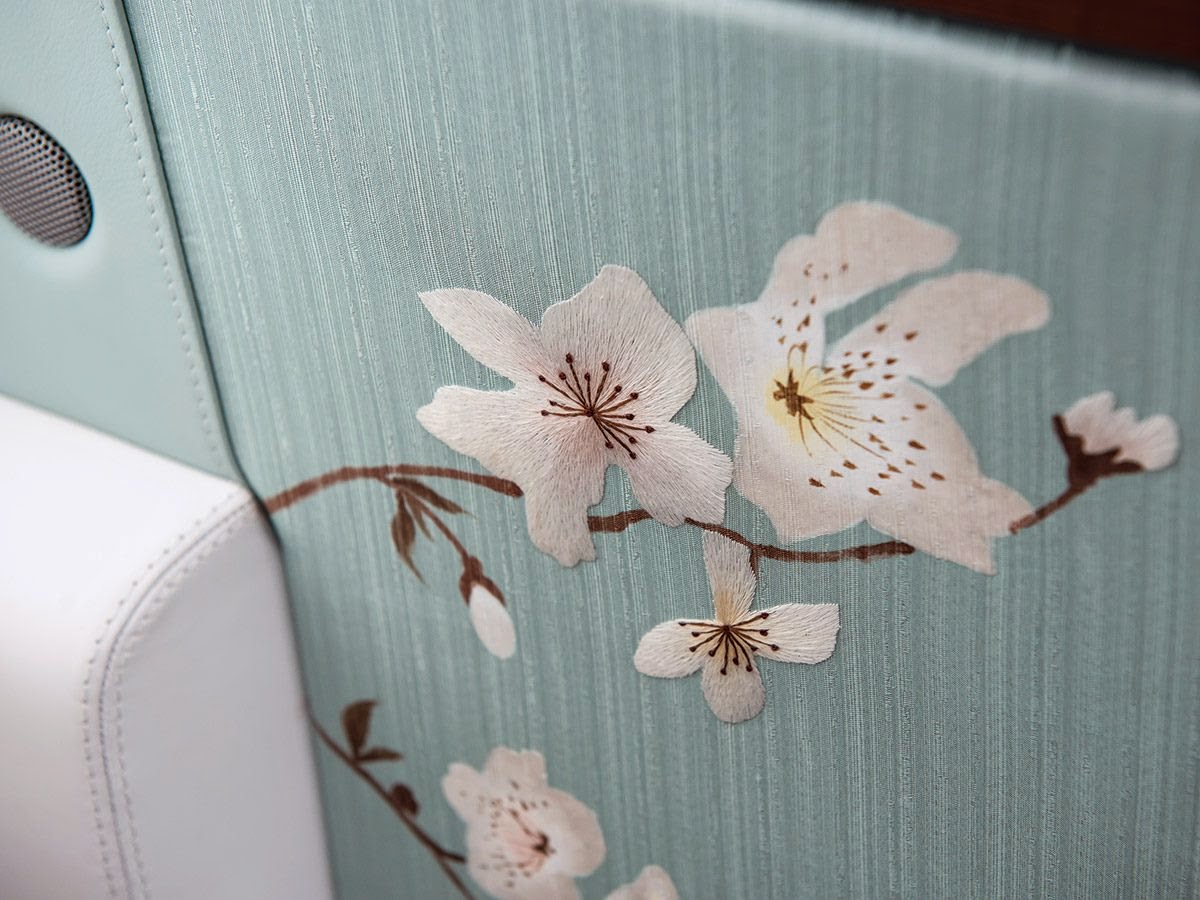 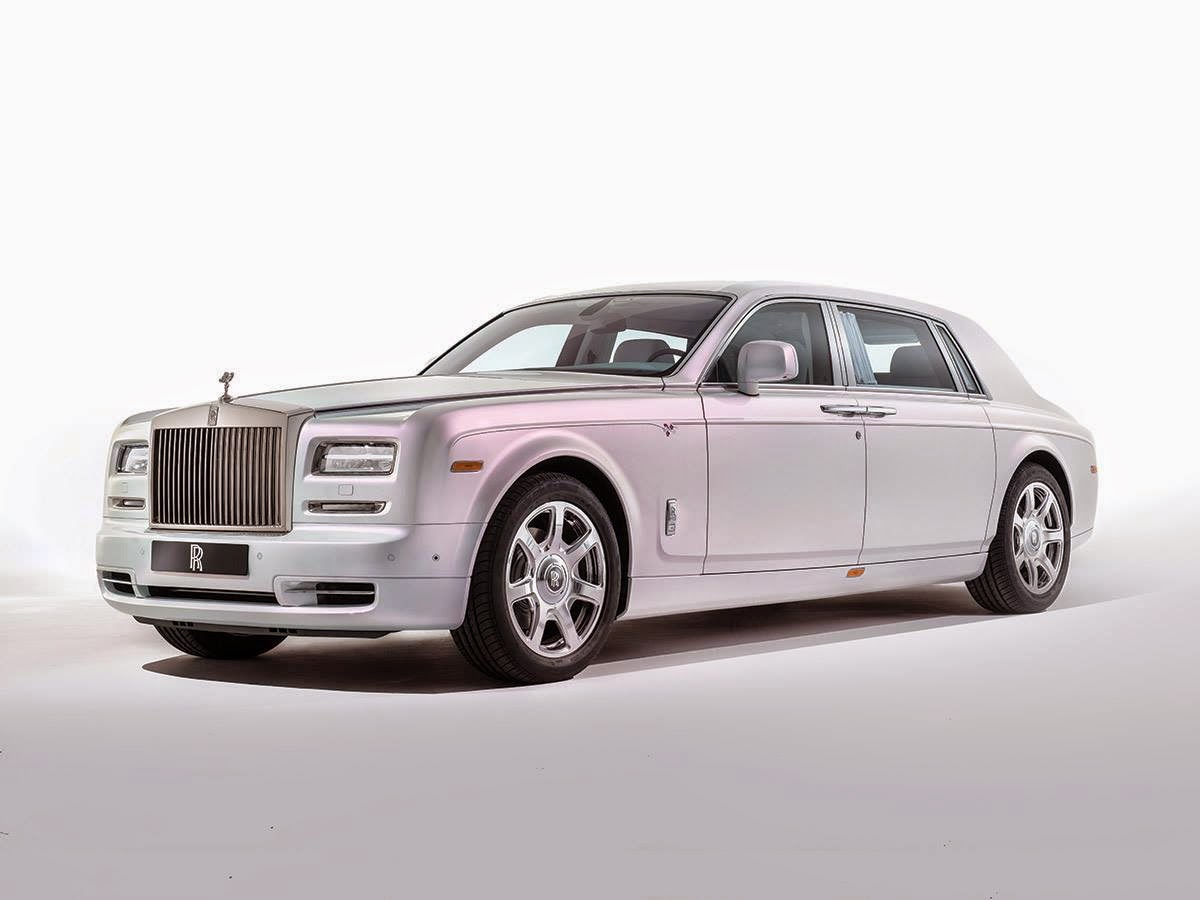 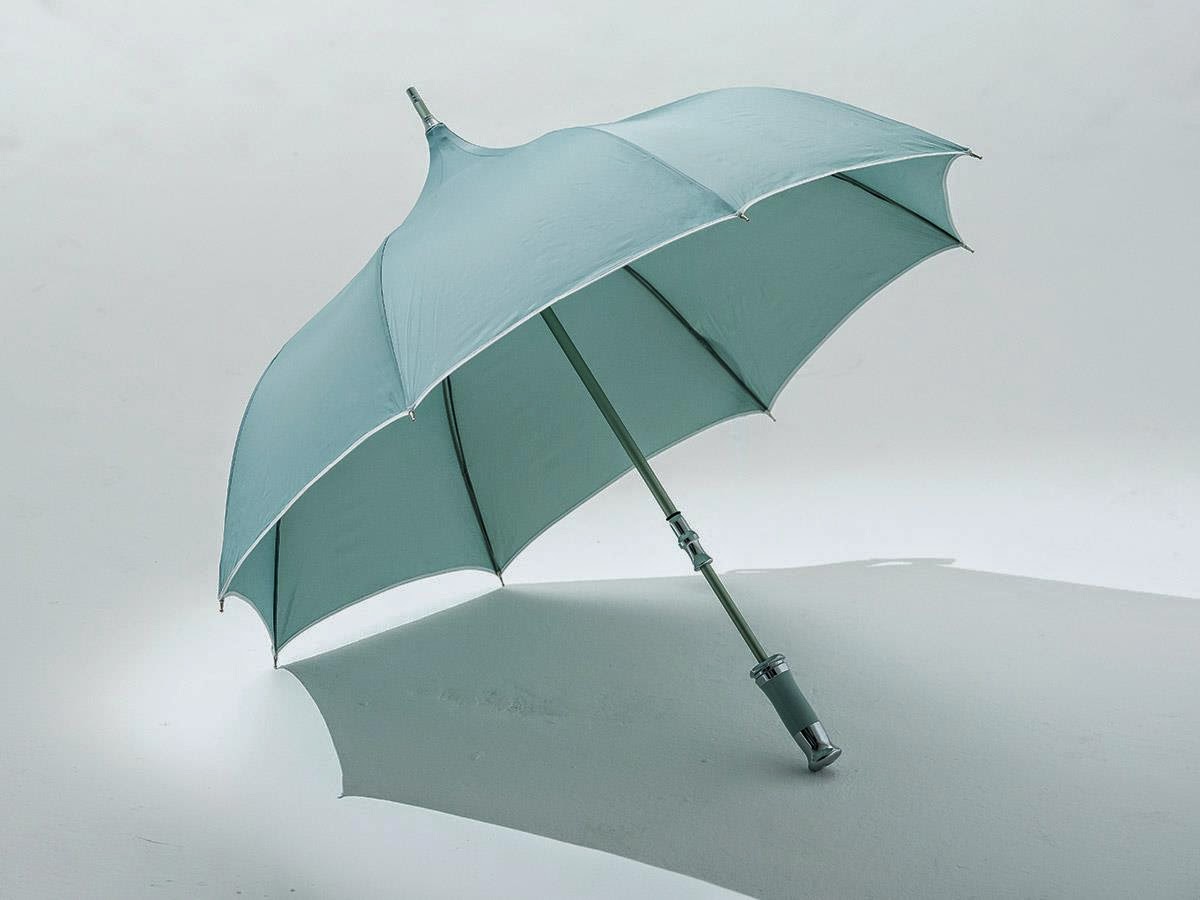 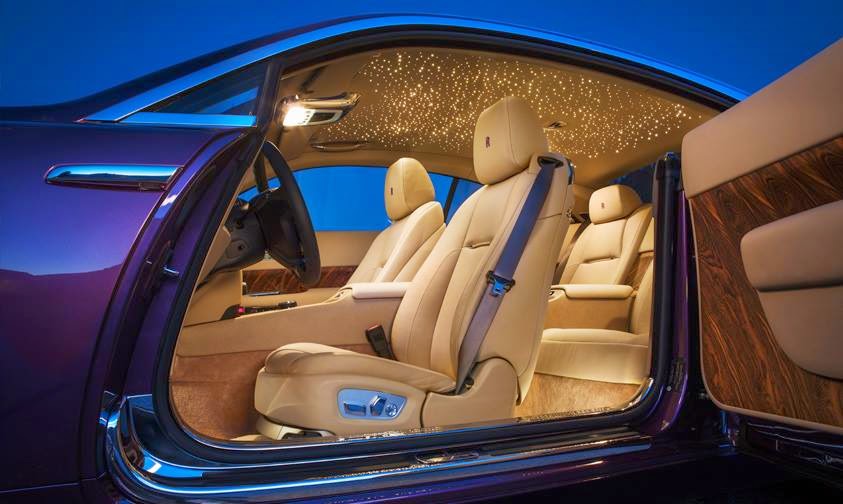 The Wraith’s Starlight headliner is made of 1,340 gleaming fibre optics, painstakingly installed by hand. As you would expect from Rolls-Royce, they can be sewn into the constellation of your choice. Let the night sky come alive, inside.
No comments: 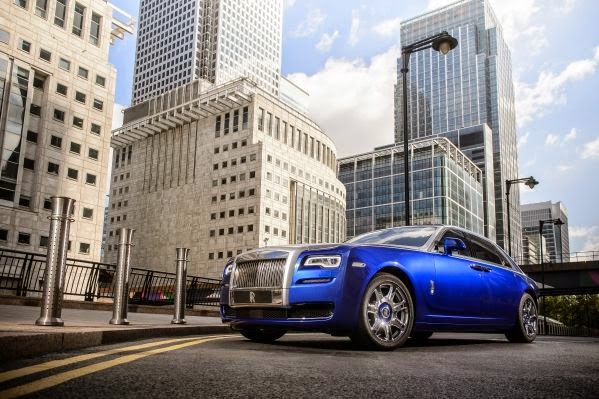 Rolls-Royce Motor Cars has today revealed record sales results for a fifth consecutive year, with 4,063 cars sold globally during 2014. This exceptional result means that sales have more than quadrupled since 2009.

Europe saw strong growth in a number of markets with Germany up by 30%, while in Asia Pacific, Australia grew by 75%, Japan by 60% and Korea 20%. In the Middle East, highlights included Bahrain (up 50%), Kuwait (up 45%) and Oman (up 27%). Emerging markets such as Azerbaijan, Kazakhstan and Vietnam all showed promising growth.

The best-selling Rolls-Royce dealership in 2014 was Rolls-Royce Motor Cars Abu Dhabi. As part of the marque’s commitment to long-term sustainable growth, six new dealerships were opened in 2014, including Mexico City, Calgary, Canada and Gold Coast, Australia. A total of 127 dealerships are now in operation and further expansion is planned for 2015.

Torsten Müller-Ötvös, Chief Executive Officer, Rolls-Royce Motor Cars said, “This fifth consecutive record year saw Rolls-Royce Motor Cars break through the 4,000 car sales level for the first time in its 111-year history. The result confirms that our strategy of balanced, sustainable and profitable growth is delivering and that Rolls-Royce remains the world’s leading luxury goods brand. This extraordinary success has been built on strong foundations: pinnacle products, dedicated people and a commitment to ensuring a balanced global sales picture.”

Sales were driven by strong orders for Ghost Series II, launched in November, and Wraith, which enjoyed its first full year of sales, while the incomparable Phantom remains the company’s pinnacle product.

Bespoke Collections including Waterspeed, Pinnacle Travel and Metropolitan, and unique creations such as the Maharaja Phantom Drophead Coupé contributed to Rolls‑Royce sustaining its leadership of the industry in the area of individualisation. In 2014, Rolls‑Royce once again sold more cars in the +Euros 200,000 net segment than any other manufacturer.

2014 also marked the first year in which every Phantom, and the great majority of Ghost and Wraith models, left the Home of Rolls-Royce at Goodwood in West Sussex, England with significant Bespoke personalisation. A record number of customers spent personal one-on-one time with Rolls-Royce’s Bespoke design consultants commissioning their personalised vehicles.

To meet such strong demand, particularly for Bespoke cars, the company has created over 200 new permanent jobs in the past 18 months. More than 1,500 people are now employed at the Home of Rolls-Royce.

Further evidence of Rolls-Royce’s commitment to expansion in Great Britain came in September when the company announced plans for its new Technology and Logistics Centre at Bognor Regis, close to Goodwood. Construction of the new 30,000m2 facility, which is due to open in 2016, is well underway and around 200 new and existing staff in technical and logistics roles will be employed at the Centre.

Business Secretary, Vince Cable said, “Rolls-Royce motor cars are famous throughout the world with increasing numbers now exported abroad. The skill and dedication of its workers here in Britain has led to another very successful year.”

“The UK’s automotive industry is thriving with a new car rolling off the production line every 20 seconds, and increasing levels of investment that’s helping to secure local jobs. Through our industrial strategy we are backing companies like Rolls-Royce Motor Cars as they go from strength to strength, giving them the right environment to invest with confidence and create high-skilled jobs".
No comments: 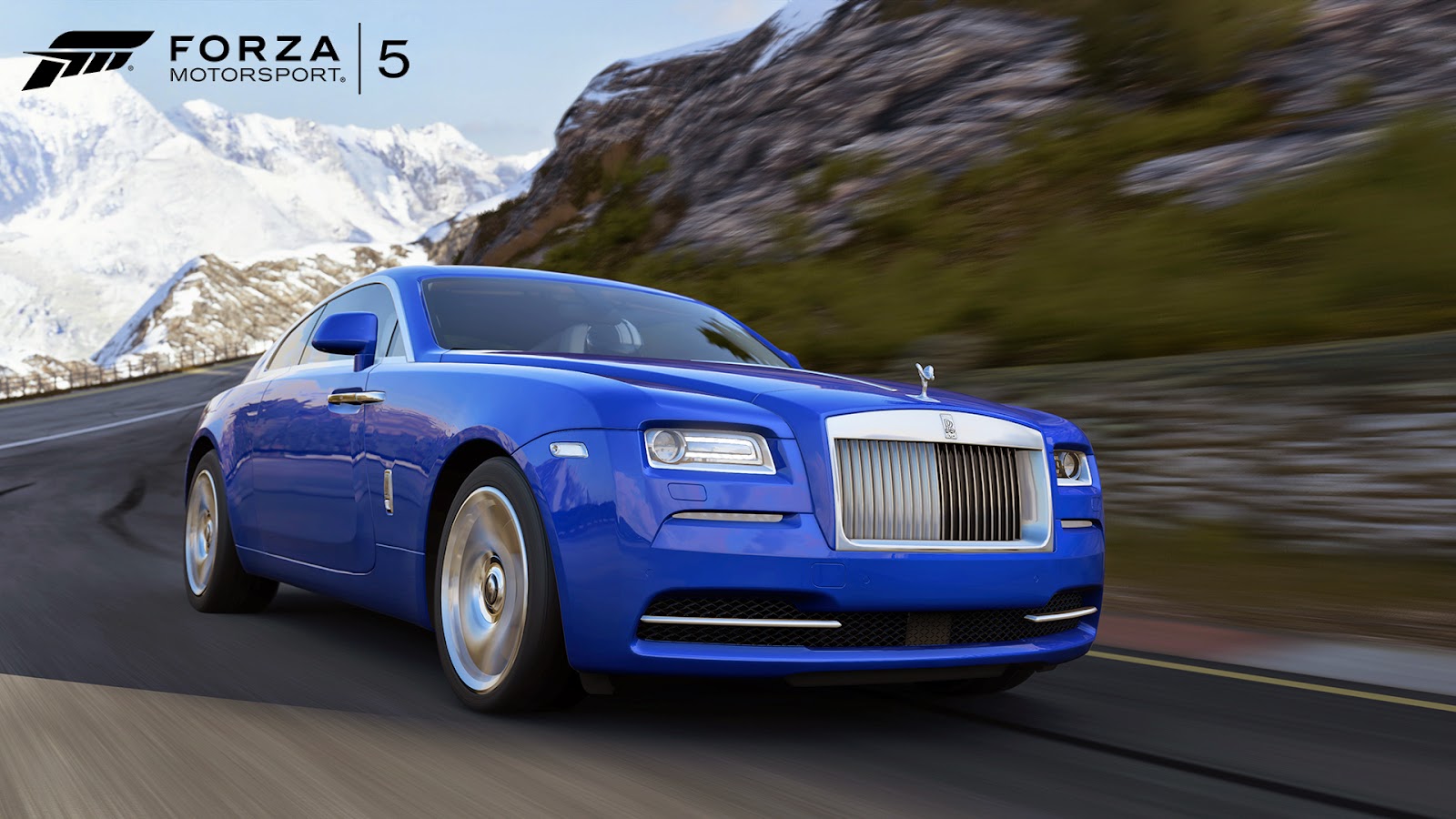 Rolls-Royce Motor Cars, the epitome of luxury, today makes its video game debut. Wraith, the most powerful and dynamic Rolls-Royce in history, is available today, exclusively in Forza Motorsport 5 for Xbox One.Available to all owners of Forza Motorsport 5 as a free download, Rolls-Royce Wraith allows players to drive, explore and experience the super-luxury vehicle in unprecedented visual realism. Developed by Turn 10 Studios, Forza Motorsport 5 features an all-new graphics engine, created exclusively for Xbox One, delivering physically based material rendering that re-creates the real-life characteristics of thousands of unique materials. Coach doors open to reveal a sumptuous contemporary interior complete with expanses of wood and leather detailing, looking real enough to touch. The marque’s sweeping fastback design appears complete with a Bespoke Starlight Headliner consisting of over 1,340 fibre optic lamps, creating a star-studded interior, allowing players to drive in the ultimate style. 624bhp derived from the car’s 6.6 litre twin-turbo V12 engine is delivered effortlessly courtesy of Satellite Aided Transmission, a cutting-edge technology that marries the car’s gearbox to GPS data to ensure Wraith is always in the correct gear, therefore poised to deliver its abundant power.Marc Mielau, General Manager Marketing, Rolls-Royce Motor Cars commented, “We are delighted to mark a first in video game history by introducing Wraith, the most powerful Rolls-Royce ever made, into Forza Motorsport 5. The game will provide players with a new level of excitement by exploring the iconic features of Wraith. We are proud to present this compelling combination of refined super-luxury and poised dynamism in such a new and immersive way.”Wraith will be offered in 12 colour combinations, with Rolls-Royce signature two tone options available.
No comments:

The car will build on the success of Phantom, Ghost and Wraith by continuing to boldly shape the future of the marque with contemporary, graceful and sensuous styling. It will deliver effortless, open-top touring through the perfect marriage of modern Rolls-Royce luxury, style and elegance with an engaging and exhilarating driving experience.

The new car is currently undergoing a rigorous process of prototype testing as it enters its next stage of development.
No comments: